International Conference on Peace and Conflict Resolution (ICPCR) held annually at the University of Tehran, is a forum to exchange and present the innovative ideas on peace studies and conflict resolution. ICPCR aims at paving the way for scholars, students and independent researchers to share their knowledge, findings and experiences and welcomes contributions from various disciplines and scholarly traditions, including but not limited to Religion Studies, Politics, International Relations, Sociology, Psychology, Art, Media Studies, Human Rights and Environmental Studies. Thus, innovative papers that apply new theoretical frameworks with a functional and problem-solving approach are more likely to be accepted and presented in the conference. 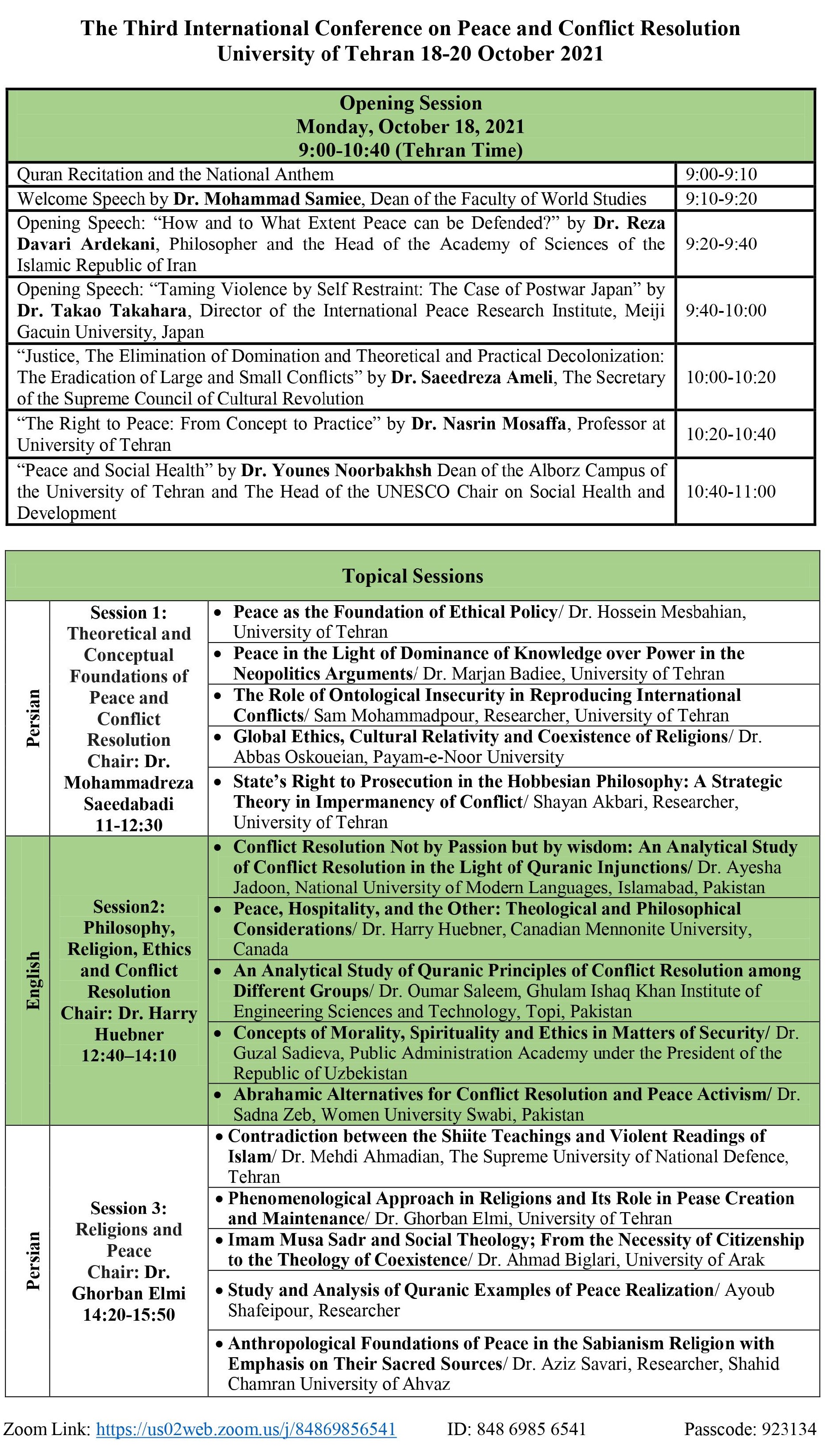 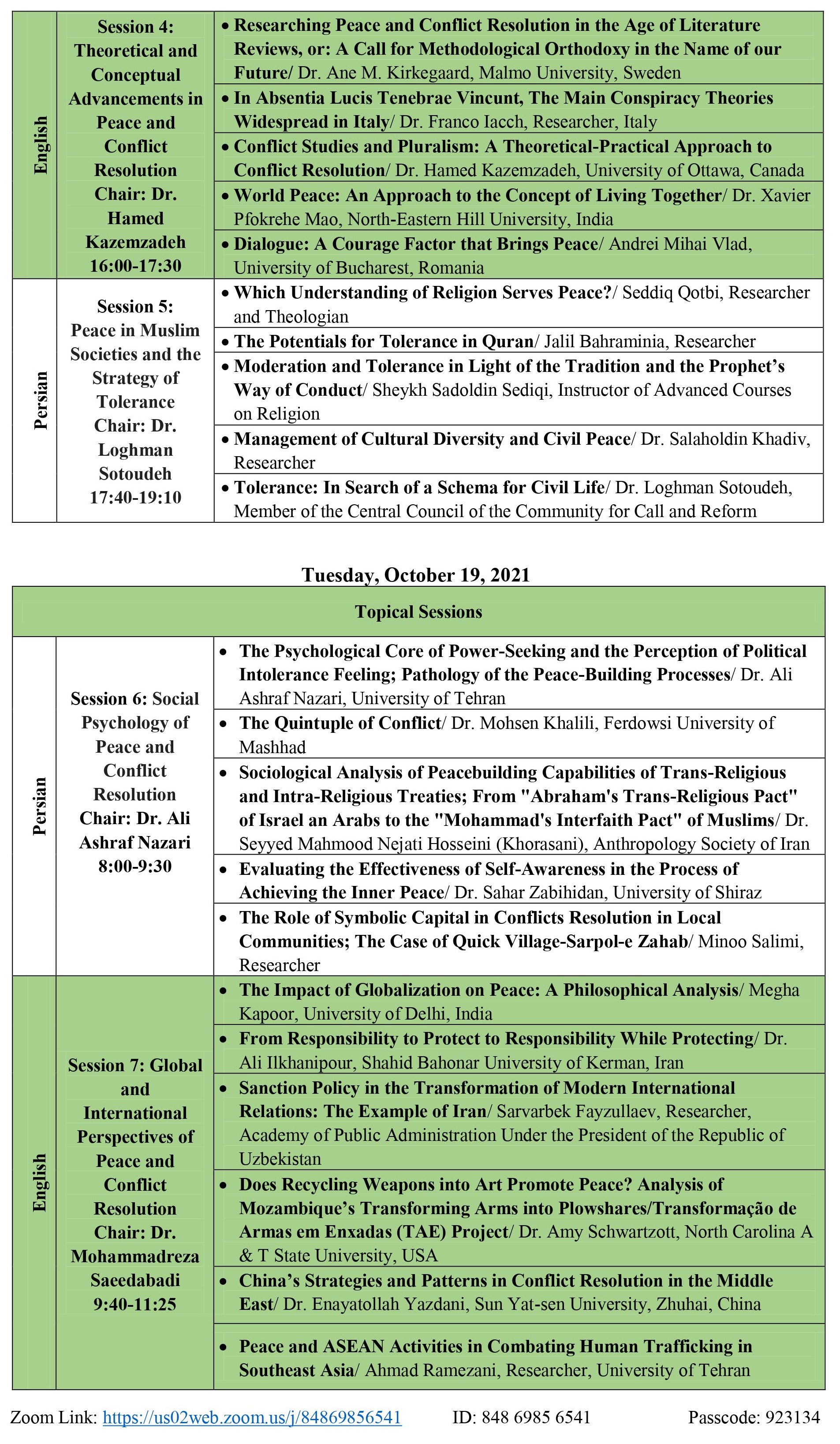 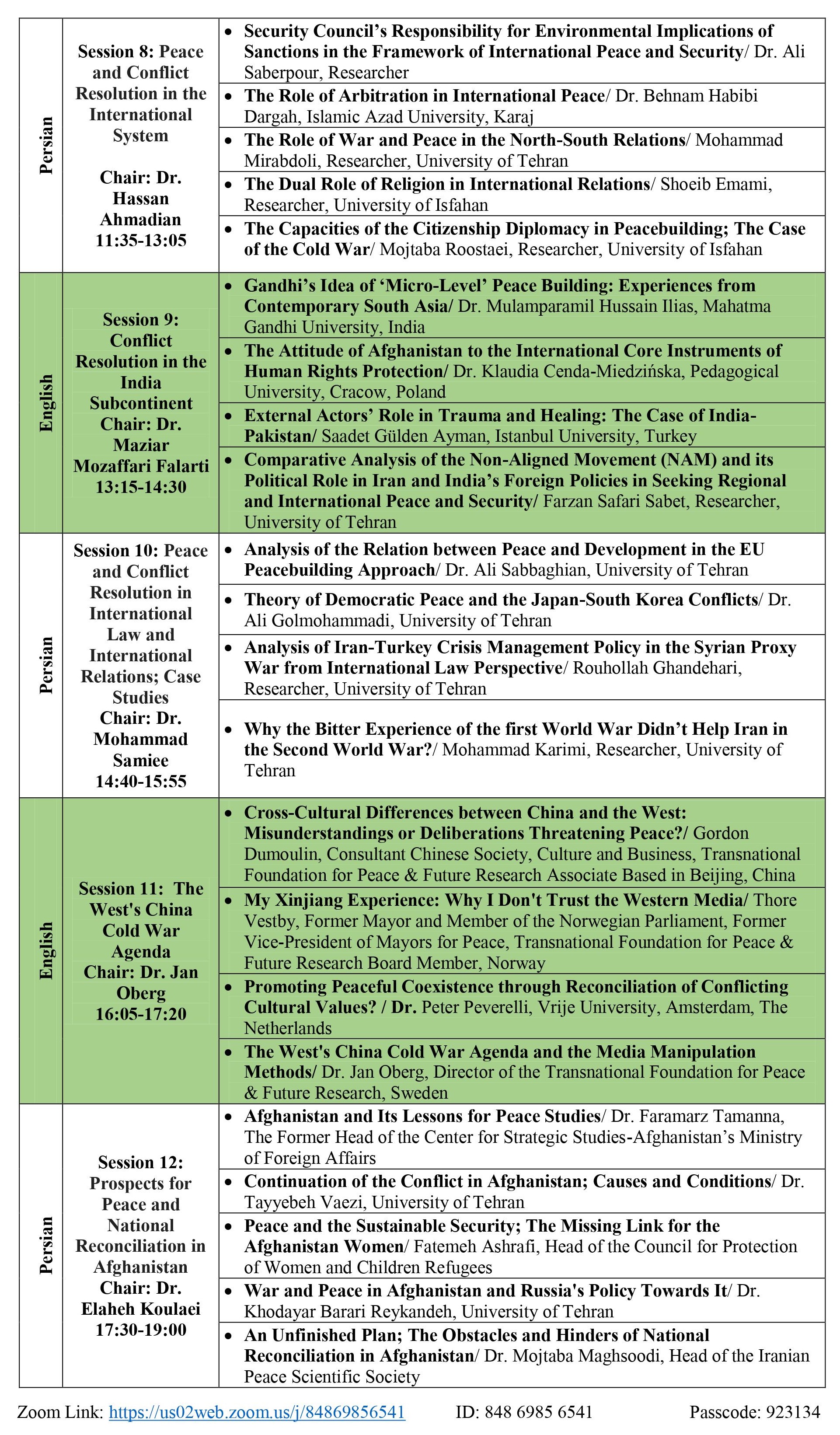 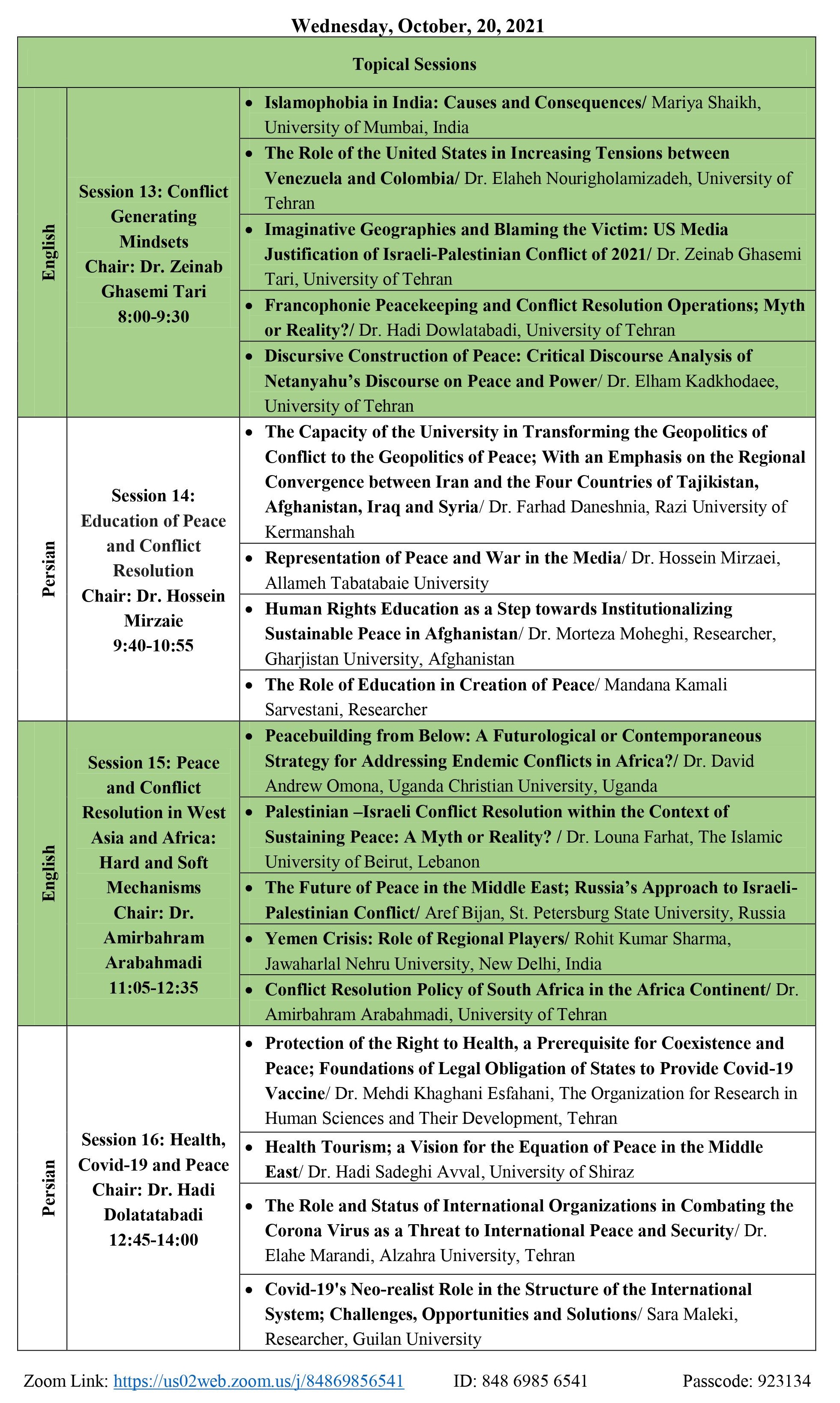 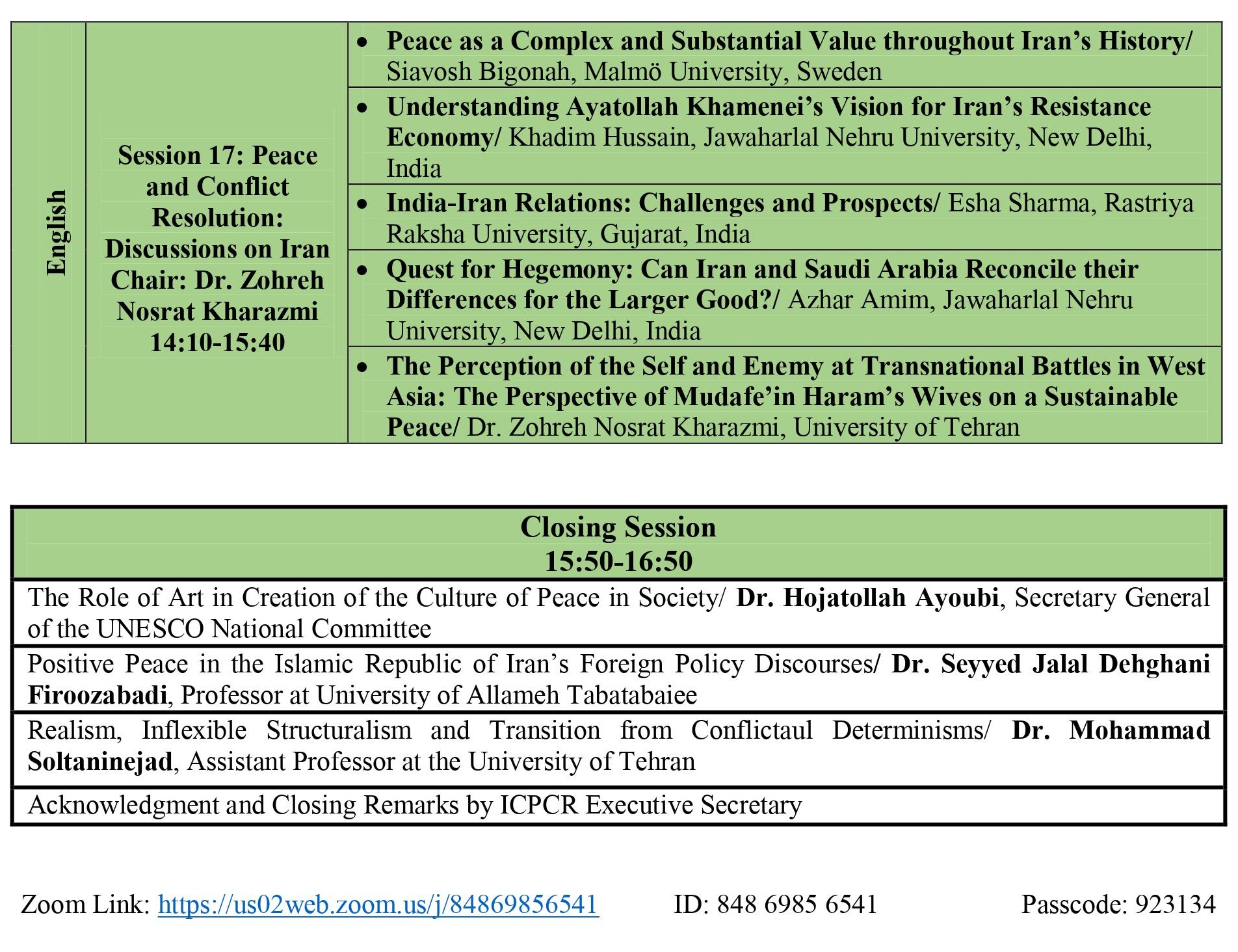 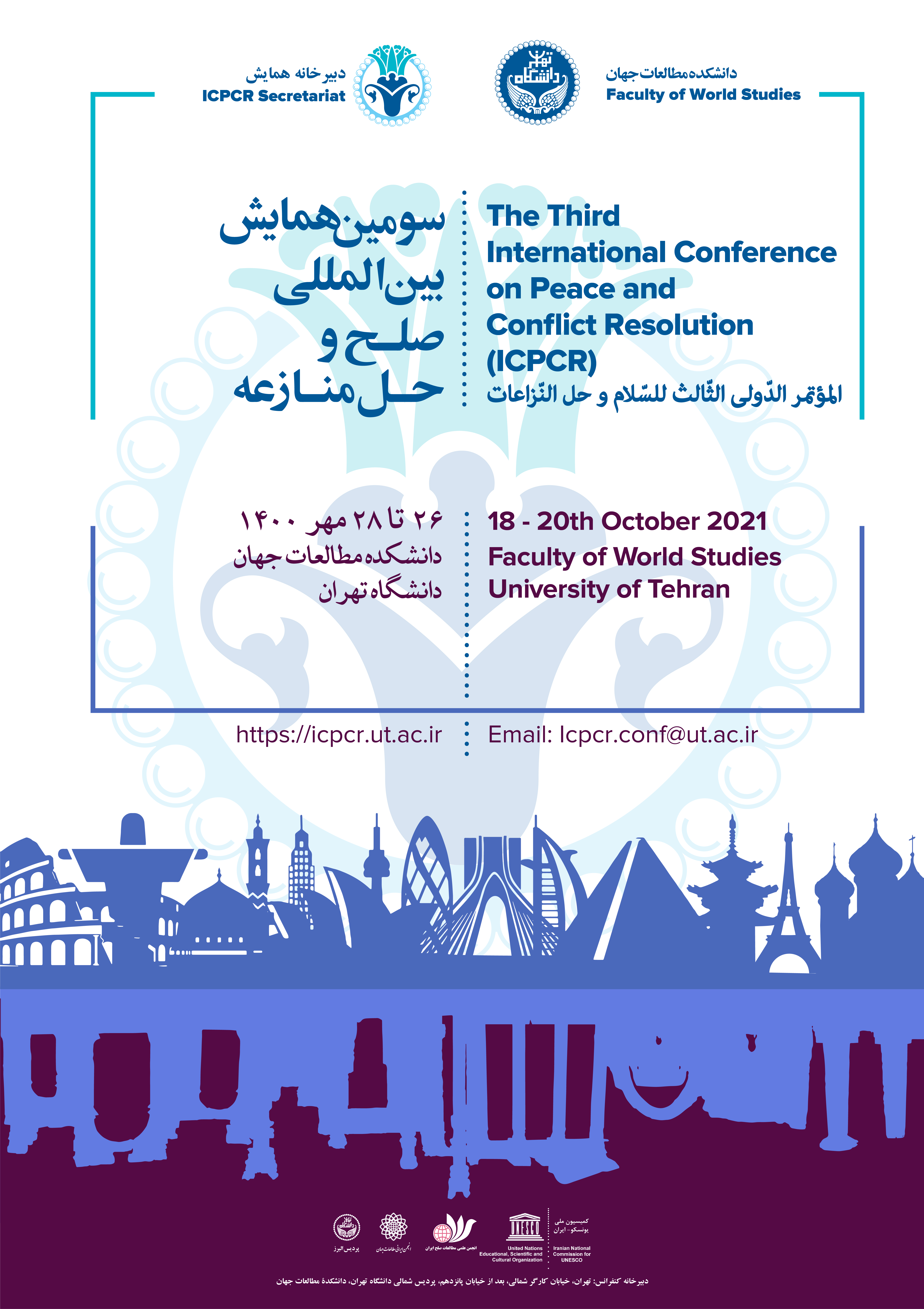 As the world is burning in the fever of natural violence COVID 19, we are holding the Second International Conference on Peace and Conflict Resolution. COVID has claimed around one million and three hundred lives and continues to despair all countries in the world.

What is certain is that, under these hard conditions, the international system, the world community, and the Iranian society is in need of peace, tranquility and cooperation today more than ever. It is essential that everyone does everything they can for more scientists, experts, and thinkers get involved in politics and decision-making so that peace and patience is strengthened and violence and extremism is weakened. Peace and conflict resolution is as important as the existence of human being. All human activities and development is dependent upon peace and tranquility. Peace and security is the most basic and the primary need of human beings and its provision is a duty for any government. Without peace and the capability to conflict resolution, there is no positive and durable security. A successful society is the one that is able to take meaningful steps to provide durable peace and warm peaceful coexistence both internally and externally.

The University of Tehran believes the holding of the International Conference on Peace and Conflict Resolution is a humble step in this direction. The existential philosophy of the university lies in helping the talents to bloom so that the wise and brilliant people in the society are promoted to experts and elites who would direct the society towards development and resolve its issues in various areas. One of the problems and harms that is inflicted upon today’s society in all levels from family, school, and neighborhood to social institutions, governmental organizations, political parties and the administration is lack of tolerance and the low level of self-control and intolerance towards hearing others and resolution of disagreements. Issues should be managed and resolved because if they are not resolved or remained untouched they turn prolonged and lead to dissatisfaction in individual and collective levels. One of the responsibilities of university in this field is to develop the culture of tolerance, self-control and patience together with increasing the skills and techniques of dialogue, negotiation and conflict resolution.

After holding the first international conference on peace and conflict resolution in May 2019, the second international conference was planned for June 8, 9 of 2020, but the COVID 19 crisis led us to postpone it to November 23, 24 of 2020. The event was to be held with the participation of the presenters. However, the COVID 19 problem continued and therefore meetings, scientific gatherings and classes were either cancelled or were held online. The Second International Conference on Peace and Conflict Resolution will not be an exception. Therefore, the policymaking council of the conference decided that the event would be held as secluded, though in an online format. I appreciate the participation of all professors, researches, and interested individuals who helped us have a vibrant environment with sending us their abstracts. The majority of abstracts were eligible to be presented but time and schedule limits made us make choices among them, but we are still pleased that all abstracts are made available to the scientific community through the book of abstracts that you now have in your hand.

The Head of the Secretariat and Scientific Secretary of the Conference

In the Name of God

Development and growth rests on security and peace, while war and violence are its ultimate undoing. Human beings are the primary victims of war, with a majority of them consisting of children, women, and innocent civilians. Any kind of wars and violence is rooted in clash of benefits, which stem from conflict over beliefs and attitudes. But the main reason of this clash and conflict lie in a diversity of creations. It is one of the miracles of God that two persons are not created the same and this diversity proves one of the merits of system of creation and of God's greatness and creativity as Nasir al-Din al-Tusi has elaborated in his book Nasirean Ethics. Therefore, diversity in taste, attitude, lifestyle, belief and opinion is quite natural and praised in Islamic texts. In society and politics, this diversity that brings about clash and conflict over benefits and interests has to lead to collective agreement, otherwise whether in short or long-term it ends in irretrievable loss, the least can be corruption and deficiency in the civil services and backwardness of countries.

It is the bitter truth of history that scientists, intellectuals and the innocent public are the ones who pay for the whims of politicians, falling victim to their short-sighted, expansionist policies. Any type of war and violence –except defense- is rooted in human ignorance, avarice and ineptitude and it is the collective social responsibility of intellectuals, scientists and academics to use the resources at their disposal to mitigate violent and extremist tendencies.

The Middle East today is one of the most volatile regions in the world, plagued by war and turmoil. Numerous reasons have contributed to the region’s propensity for conflict, including the diversity of ethnic and religious groups, political motivations and megalomania among its leaders, irrational states and the lack of a culture that could foster democratic leadership, its rich natural resources and the competition over the control of the said resources, low literacy rates, and finally its historically violent and inflexible culture.

People and NGOs and west Asian states require to strive to develop to the extend to be able to prevent the interference of foreign powers. The first step is that people of the region and different groups negotiate for their benefits to avoid violence and insecurity. A combination of circumstances must have led to the interference of foreign powers in the Middle East. It could be that they see the region as malleable, or that they are even invited and welcomed by the countries in the area. In some instances foreign powers are not the cause of conflict; it is the Middle Easterners themselves who breed violence. Some countries in the region struggle with civil wars, with different parties aiming to seize control of resources. These deadly conflicts point to a greater issue at hand, and that is a lack of communication that does not allow constructive dialogue to be held, and a lack of management skills and conflict resolution.

One of the features of the hostilities in west Asia is its religious roots, or rather the religious pretexts, that have further complicated the situation in the region. Every group or party use the name of Islam to lend credibility to its claims of power, proclaiming themselves as the legitimate ruler of the country while painting the opposition as an evil that must be destroyed. To those familiar with the subtleties of Islam, it is obvious how the previous approach is a far cry from Islamic teachings.

The end of every war and violence is compromise, but it goes with life loss, destruction of countries and humiliation of human dignity. In most cases, people who are against compromise are disposed. Intellectuals agree with compromise even though it may cost a price, and they attempt to compensate for its costs because costs of compromise after war and violence are way too much more than before war. There is no choice but to change the culture of violence and extremism and provide negotiation atmosphere in order to avoid costs of war that have targeted human growth and prosperity, The only way to change this culture of violence and radicalism is to create an atmosphere in which the parties to a conflict can initiate a dialogue to work out non-violent solutions. While it is true that there are as many ways to achieve justice and development as there are countries on the earth, all these ways share some basic tenets and those are security, peace, communication, avoiding otherization, and respecting all humans and belief systems and religions.

Starting a war, no matter what the reason, is one of the most hideous crimes that governments can commit. The outcome of war, no matter what the reason, is nothing but misery and the waste of so many lives that could have contributed so much to the society. To incur such a cost to any society is the ultimate injustice and the only way to reverse this injustice is to promote and encourage communication and cooperation, and to identify the consequences of radicalism and violence.

My research in the past 30 years on humans, society, and politics have led to two strategic and crucial principles,

One, nothing is more worthy than peace and coexistence.

Two, nothing is worse than war and violence.

Therefore it is only natural that the most urgent and the most valuable area to work on is peacebuilding, coexistence, and negating any culture of violence and war. Since most of my research on politics and Islam focuses on the Quran and Sunnah, Islamic texts and teachings have clearly played a major role in me coming up with the two principles mentioned earlier.

Although the execution of the mentioned programs has its barriers, I believe it is the greatest service one can offer the Iranian community and the world. Any action which attempts to promote peace, teach conflict resolution and reject violence, no matter how small, can leave its trace for a future generation.

In the end I would like to express my utmost gratitude to my dear colleagues who lent a helping hand every step of the way, Dr. Saeid Reza Ameli, head of the World Studies Faculty, Dr. Zohreh Kharazmi, the executive director of the conference and a member of the faculty, the members of the scientific board of the conference whose names are on the website along with Atieh Damak and Koroush Ashkbous. Many other colleagues whose names have mentioned on the website helped us generously in holding the conference. I would appreciate their cooperation and wish them the best.

Subscribe to our email newsletter for useful tips and valuable resources.

You have successfully subscribed to our newsletter.